By Jesse Murray, Head of Trust and Safety

We know that you won’t take a ride on a scooter unless you feel that it’s safe. We work hard every day to ensure a safe ride, from building best-in-class hardware, training our riders on best riding practices, and working with cities to improve road conditions to prevent incidents with other road users.

We recently set out to assess a year’s worth of reported incidents on Lime scooters in the US, where we have operated longest and have the most complete and standardized data. Our analysis covered the period between March 1, 2019 and February 28, 2020. Incident reports were collected from in-app feedback, rider contact through customer support, our legal claims department, and reports from media, staff or government and community partners.  We evaluated each incident reported via user comment as well as incidents we learned of through other mediums.

We aimed to understand how, where and when reported incidents occurred, as well as the severity and contributing factors. This helps to establish a baseline so we can measure improvements over time, allowing us to take a comprehensive approach to improving rider safety.

We assigned each reported incident a severity level based on impact to the rider:

We found that 99.985% of all trips during this period were incident-free, with riders not reporting a single injury. This means that less than 0.02% of Lime scooter trips in the US resulted in a reported incident.

Of the reported incidents, 93% were reported as minor scrapes, cuts or bruises that did not require medical attention.

We also found that reported safety incidents declined as riders became more experienced, with riders with less experience accounting for a higher proportion of reported incidents. 36% of incidents were reported as occurring within the riders’ first five trips. Similar to findings from independent medical studies, the highest percentage of reported incidents occurred during a rider’s first ride, at 23%: 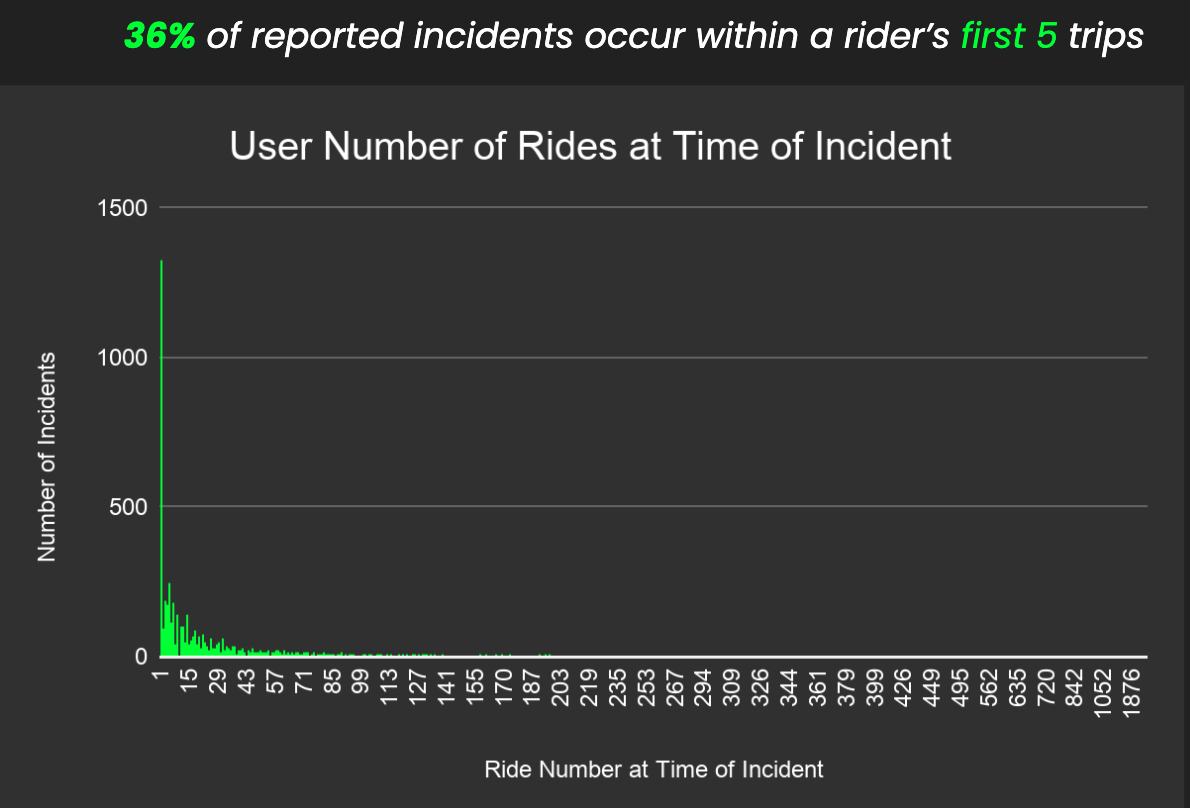 As we came to understand this dynamic, we launched our First Ride course in cities around the world, helping new and early riders learn the basics of riding in a low-stress environment with Lime team members on-hand to help out and answer questions. We also revamped our pre-ride safety tutorial, debuted our Lime Safety website, and created comfort mode, the industry’s first “training wheels” that allow new riders to select a lower speed limit.

Going forward, we’ll continue to revisit these numbers, assessing future data against this baseline as we aim to improve rider safety. It’s the latest step we’re taking to put safety first and build upon our industry-leading efforts. These efforts build on the inherent safety benefits of micromobility. As cities set Vision Zero goals, micromobility improves safety by encouraging a shift away from cars, which results in a safer, more human-scaled transportation system.

For more information on how Lime works to keep riders safe, including our extensive COVID-related safety measures, you can visit safety.li.me.

Get these stories delivered straight to your inbox

Lime aiming to raise £10,000 for Fareshare South Midlands and SOFEA via new charity partnership as it expands Milton Keynes e-scooter fleet to 500 vehicles