It’s 2019, the streets of Paris are teeming with electric scooters, and a new study is showing just what kind of an impact the global rise of micromobility is having on one of Europe’s most influential cities.

Conducted by Lime and noted polling institute Odoxa, the survey was carried out from February 11-25. The vast majority of its more than 1,500 respondents live either in Paris or in the surrounding Île-de-France region, demonstrating how electric scooters are being used in everyday Parisian life.

Eight months after Lime became the first micromobility provider to offer electric scooters in the French capital, 11% of Parisians report using e-scooters either “frequently” or “from time to time.” This means that nearly ¼ million city residents have already made dockless micromobility a part of their normal transportation routine.

Additionally, 5% of residents in the surrounding Île-de-France region report using e-scooters either “frequently” or “from time to time.”

According to Odoxa, an astounding 59% of Lime users in Paris report using electric scooters to at least partially reduce their reliance on personal motorized vehicles (cars, taxis, rideshares, motorcycles and mopeds).

That’s not just good news for environmentalists; it’s also good news for Parisian motorists, who spent nearly 240 hours stuck in traffic congestion in 2018 according to INRIX.

When asked if they use electric scooters as a compliment to other forms of transportation including bikes, cars, buses, trams and the Paris metro, 85% of Lime riders responded either “yes, frequently” or “yes, sometimes.” 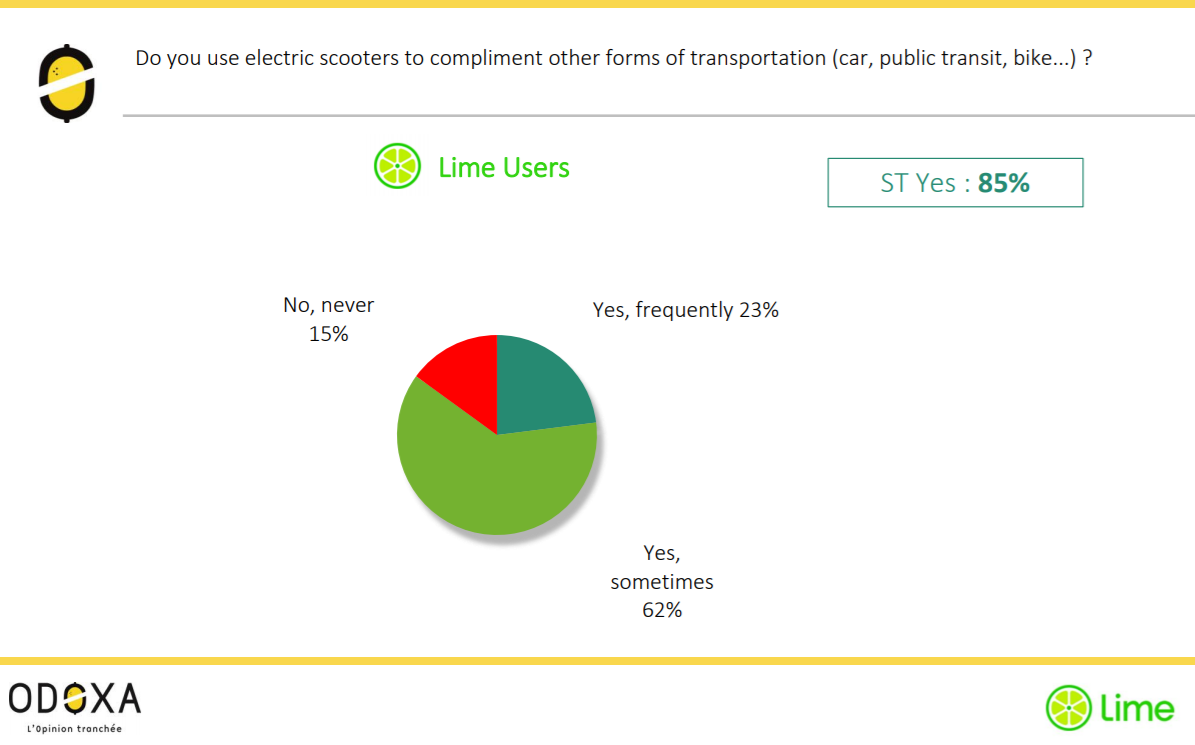 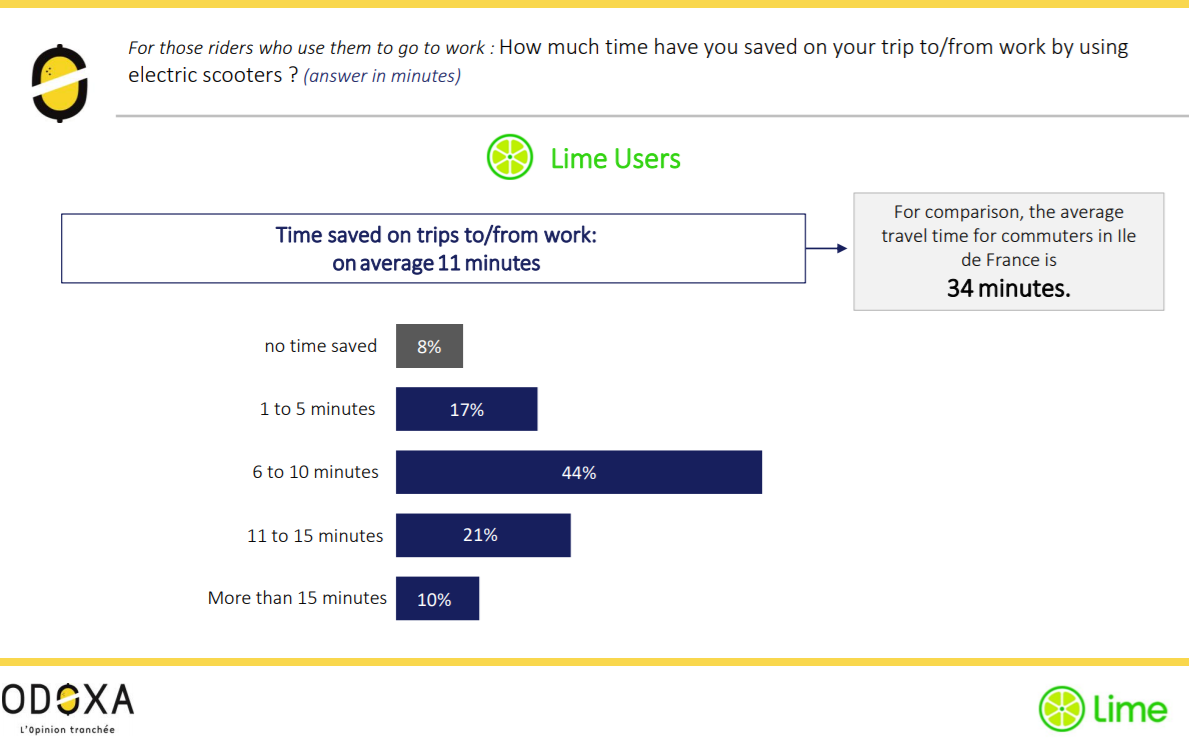 Parisians overwhelmingly prefer riding shared electric scooters on dedicated infrastructure. In fact, when bike lanes are available, Lime riders in Paris use them 93% of the time in lieu of alternative options such as streets or sidewalks.

Similarly, the number one cause of feeling unsafe on an electric scooter is being forced to navigate street traffic or ride on sidewalks due to the absence of dedicated micromobility infrastructure. 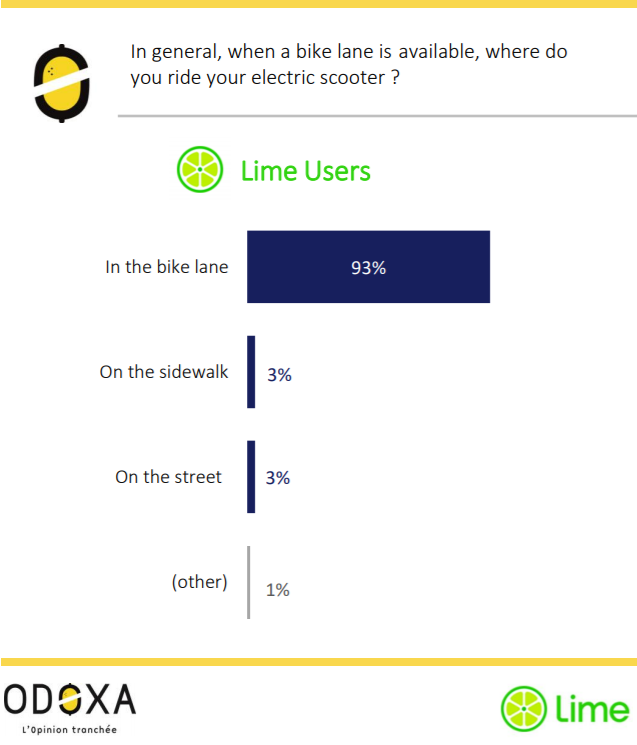 88% of Lime riders in Paris prefer the convenience of dockless micromobility to traditional station-based systems.

To help ensure that riders abide by safe riding and parking practices, Lime has launched a global Respect The Ride campaign centered around education and helmet distribution. In the wake of such events, 72% of Paris Lime riders reported that they are more vigilant about where they park. 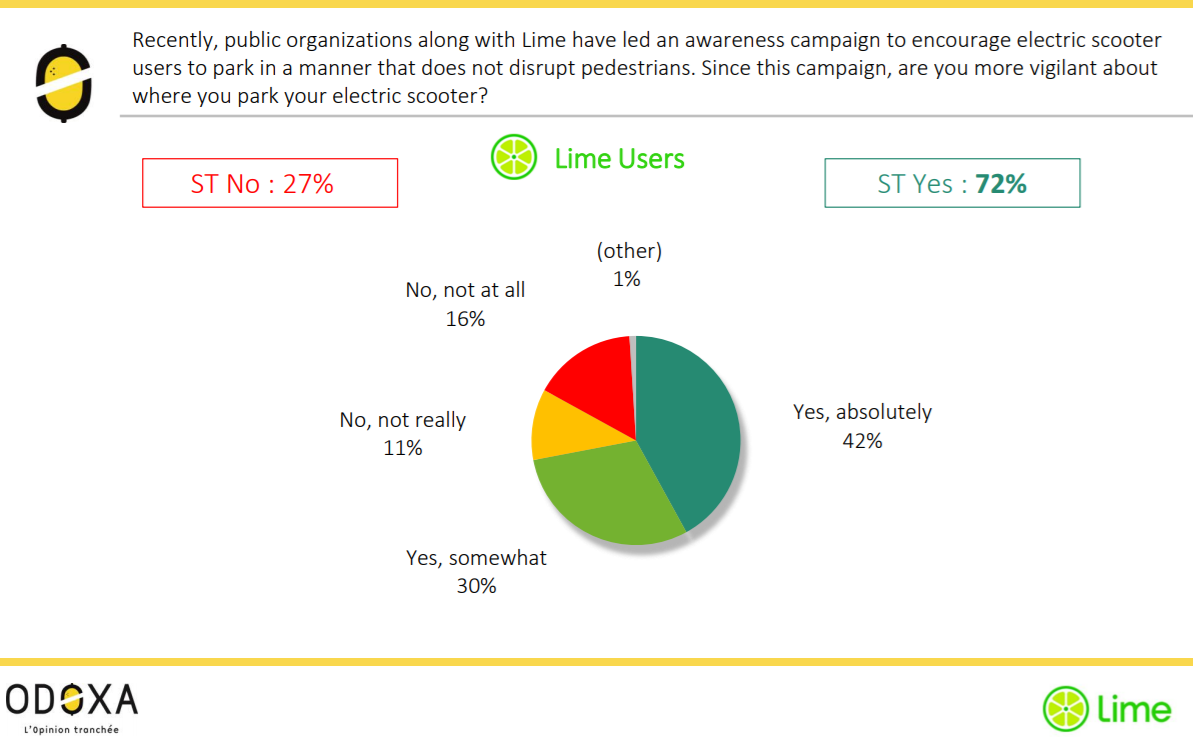 To read the full findings (French only), click here. You can also subscribe to Lime’s 2nd Street for the most recent news and updates on the world of micromobitliy, or download the Lime app to take a ride for yourself.
Lime Times Blog